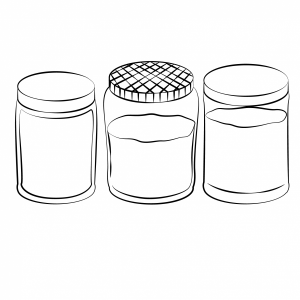 The cultural anthropologist Margaret Mead once wrote that every woman needed three men in her life. One as first young love. One to be the father of your children. And finally, one to be your soulmate in full maturity. Who would ever have guessed that someone I had never met could trace my romantic life and loves so well? Since each of mine was particularly sweet, I’ve recast this as my three pots of jam…

I have found that many people are experiencing the same trajectory. Life is long, and lengthening. Each phase of life demands that we grow and change. Our relationships need to be able to do the same. Some couples are able to negotiate these evolutions together, others will not. It takes two to tango, and unless both partners are willing to shift to a waltz, finding different dancing partners for different parts of life is likely to become increasingly common. A relationship that was a perfect, passionate introduction to love may not be the best match for having and raising children. And the father of your children may not be the kindred spirit with whom you dream of spending the thirty or more years now on o er after the children move on.

My first love, romantically enough, was a Frenchman. He was exactly what that word mythically means. He was utterly charming. And kind, and creative. He was the older brother of a friend I met after moving to Paris. He was seven years older than I was (as is my third pot of jam), and the eldest of three fun-loving siblings of ‘bonne famille,’ a term that covers bourgeois families with well-brought-up children. He was everything a first love should be: a good dancer, a passionate sailor, a tender lover. And very tall. As a rather feisty short person, I have a serious weakness for tall men who make me feel small and protected. We dated for a couple of years, but I sped o to Brussels for a job, and he was, at 30, more interested in settling down – he was, in the end, too local to appreciate my international habits, and didn’t speak English. He did, I am flattered to note, end up marrying a Canadian woman (I hail from Toronto with a French mother). Looking back, I must admit he was the very loveliest way to start. I was madly in love, not just with him, but with his family, his country, his language. Delightfully, in one of those lovely loops of life, his brother recently gave my son a job.

Next came the father of my children, and a loving and peaceful 22 years. We met in Brussels, but he was a boy from Buffalo, an hour’s crow fly from my hometown. He loved Europe passionately, and has devoted his entire career to working towards its construction. We shared a lot of things: our North American origins, good educations, cheery and pragmatic outlooks on life, and international career interests that meant we could settle in the Paris he had always adored, with the French passport I contributed to our couple. It was a reasoned choice, a good match, and he was and is, through and through, a good man. He would, I’m sure I sensed, be a devoted husband and father. And he was. We had a very collegial and contented partnership. In our years together, we raised two adorable children, invested in work we cared about, and lived in harmony in a lovely old French house covered in vines. He did not, however, share my increasing concern that we might replicate what his parents had become: an uncommunicative couple who had grown apart over the years. As I aged, I yearned for more and more depth in relationships, and he did not. I like to think our parting was about as amicable as it could be.

My third man, and I trust my last, bears a strange resemblance, in many ways, to my first love. He is about the same height, also has a big, somewhat aquiline nose set between blue eyes, and an inexplicable passion for boats. He has the same sort of creative energy too, and multiplicity of talents. The same inability to focus too long on any one thing. The same incredibly charming way with women, who are most of his best friends. He has one of those delightful British accents that all North Americans find so attractive and intellectual. Backed up by a stimulating brain and love of all things aesthetic, intellectual and mechanical. A polymath, he is sculptor, sailor, lobbyist, and perhaps spy for all I know. And he is kindness itself. Kindness, I know, is probably the principal characteristic of my three pots of jam. Energy is next. They were each exactly right for each particular phase. I have not had relationships with many men, but have been blessed with relationships with the right men. I am deeply grateful to all of them, and for the arc and grace they have given to my life.

While society accepts, without a whimper, the shift from the first to the second pot of jam, the shift from second to third was dramatic, traumatic and hard. Did it have to be? Should we not be able to make contracts that are renewable, maybe every 20 years, to adapt to lives that will soon pass the 100-year mark? I’m as strong a believer as anyone in commitment and parenting and responsibility. Let’s raise our children well. And then there are two. And time to re-evaluate, recommit, perhaps redesign. At work, we are accepting the idea of lifelong learning, new careers and transformation. It’s time to accept it at home as well.

‘Grow or go’ will become the norm. It already is.

Why I Wrote This Book