“These boots are made for walking,” I thought as I saw the pair of shiny black boots in 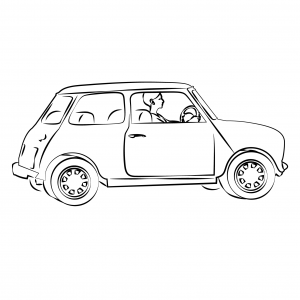 the shoe store at Barcelona airport. I bought them. It took a few more years until I finally mustered the courage to walk out of my marriage. As it happens, I actually drove away. Music blaring, Lara Fabian’s Urgent Desir on the radio calling for a blank page. “Tout effacer, recommencer.” I wanted more and less. So I drove off, in my little red Mini packed with the bare minimum: a salad bowl and the painting of the big, red pregnant woman embracing her promising curves.

Blazing down the driveway, gravel squealing, I drove onto the street, breathless and exhilarated. I didn’t even feel like turning for a last look at the beautiful old home I had found and loved and raised both children in. I wanted out. Unencumbered by the empty shell my beloved home had imperceptibly become, crack upon inexorable crack. A lovely picture of a common lie.

Things are so often not what they appear, a lesson each life delivers sooner or later. My son, my soulmate, had just left for college. His sister’s panicked phone call left him un-shelled, his snail soul abruptly retracting from the trampling of his treasured, happy life. His childhood ended not when he left home, but when home left him. He abruptly learned to mistrust his own ability to read reality. He hadn’t seen the truth behind what he wanted to be true. Most don’t, until they can’t do otherwise. The loss of innocence is shocking, as gale-force winds hit the haven some manage to construct within their own four walls. The seeming perfection was no protection in the end. Untruths never are. The reality behind many a mask ranges from the mundane to the monstrous. I can claim only something in between: the creeping malaise of indifference. The drudgery of pretend, the unapologetically unsaid, the deadening earnestness of avoidance.

A Monday morning after New Year’s, after returning to work, I took a lesson from a colleague about time management. “Start with what matters most,” she had advised a younger me. So after toasting my daughter’s bread just so, and buttering it lavishly, I watched my girl (a rear-view-image of my younger self) make her way down the drive, shoulders already starting to sag under the growing adolescent weight of all she was not. I settled into the deep, grey blue softness of our living room sofa, determined to start the year I’d turn 50 by taking control of the rest of the road. It was time. For me, for her. I wanted her to learn that so many of the world’s maps were not designed by —or for—women. It was up to us to draw our own. I carefully composed an email escape. And so began the long journey home.

Three years later, I was packing up again. My daughter had just graduated from high school in Paris, my son from college in LA. I was moving to another country, and so were they. As we began to spread out around the globe, appearances again deceived. It looked like we were moving further apart, and yet I had never felt closer to either of them. A friend, watching my son and I chatting on a hotel couch during graduation commented, “It is so obvious that when you are together, you are both home.” The walls of this home have been a lifetime in the making. They are as invisible as they are indestructible, built in the rock of mutual love. Only the rare, astute gaze can discern their true power. Within this haven, there is not a room without the possibility of laughter. Truth, in all its forms—from harmony to hardship—blows through unannounced. There is no dust that settles. And love licks at our heels whenever we walk out the door.

My daughter is just starting her journey. She has hated these last few years—and, like too many girls—herself. She is tiny in stature, with a long, thick lioness’s mane of hair. She still asks me to butter her breakfast toast. She knows I will put on all the butter she now refuses herself. And everything else besides. She is off to college this fall. We will drive there together in my little red Mini. And I will hand over the keys. They will, I hope, help her leave home—and find it.